A big weekend for all of us here at Richard Hobson Racing as Lord Du Mesnil landed the Tommy Whittle Chase at Haydock. Having waited a long time to get off the mark, he showed a game attitude at Newcastle last month to land his first career win. Following up after that he put in a brilliant performance, under an excellent ride by Paul O’Brien, he made all, skipping clear in the home straight to win with ease! Needless to say, the entire team were delighted with his effort, especially owner Paul Porter, who has seen his charge accumulate over £40k in prize money this season. 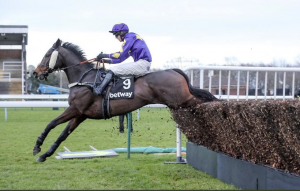 That victory was our sixth of the season, with five of them coming in the last eight runners! As well as Lord Du Mesnil, Eureu du Boulay and Defi Sacre got themselves in the winners’ enclosure, the latter following up his Musselburgh win by winning at Newbury despite a penalty. And the former landed the Grande Course de Haie de Fontainebleau for Nic Allen and Richard. In addition to that, stable star and yard favourite Chic Name ran belters both times in the Cross Country races at Cheltenham, finishing third and fourth and best of the English on both occasions. Shame those French and Irish horses keep coming over! 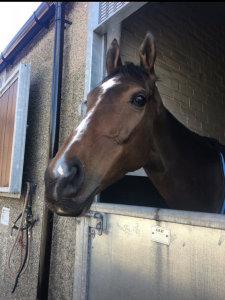 Meanwhile, some news on another yard favourite, Valadom had a nasty sarcoid removed from his chest but is recovering well and hopefully we can find him a nice opening soon. Failing that, he could get an opportunity going hunter chasing.

We may have one or two runners over the festive period, but it looks like it might be a quiet one for now. Let’s hope we can keep the current form going a bit longer!

From all of us at RH Racing, we hope you have a wonderful Christmas and a Happy New Year.

There have been too many runners since the last newsletter, so we’ve condensed them into

As mentioned Eureu Du Boulay went from zero to hero in France. Having taken the wrong course at Auteuil, he bounced back by winning rather easily in the feature race at Fontainebleu, the Grande Course de Haie de Fontainebleu under Felix de Giles, who gave him a peach of a ride. 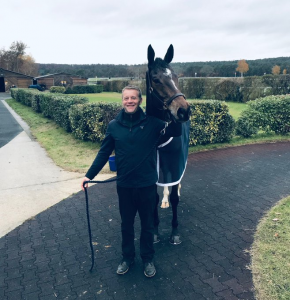 Chic Name finished third in the Cross Country race at the November meeting, battling back strongly to finish best of the British. He followed up that performance with a fourth at the December meeting, again finishing best of the British, despite being hampered by the eventual winner. It was another good performance on the track and fingers crossed he can run to a similar standard again come March.

Defi Sacre won easily over fences at Musselburgh at the start of December and followed up last week in good fashion when battling to score in a conditional handicap chase under Jonjo O’Neill Jnr. The handicapper will most likely have his say after that, but needless to say his owner Mr Ian Wills was delighted to get his horse on the scoresheet twice this month. 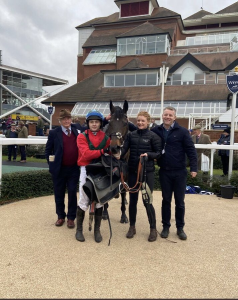 But as mentioned the biggest cheer of the month went to Lord Du Mesnil. Under a superb ride from Paul O’Brien, his jumping was impeccable and he ran his heart out. No one could live with him and turning into the straight he simply blew them away. He obviously enjoyed conditions and having taken twenty-four races to get off the mark at Newcastle in November, he’s now two from two and has won one of the biggest prizes in the history of our little yard.

Five entries going forward over the Christmas period, but only three horses are responsible for those. First up is Who’s My Jockey who has joined our yard from Phillip Hobbs’ after winning a Novice Chase at Hexham back in June. He has got entries at Wetherby over fences and Doncaster over hurdles, but he’ll probably go wherever the ground is best as he does seem to prefer better ground. We’re looking forward to see what he can do.

Defi Sacre also has two entries, one back at Newbury, the other up at Kelso, both over fences over the minimum trip. Obviously it’ll depend on what the handicapper does with regards to his mark, but he’s obviously in good form, so we’re hoping to keep going with him while we can.

The final entry is Eureu Du Boulay at Leicester, who has an entry over two and half miles over fences. He is in good form after his win in France, but this looks a competitive race on paper. He’s still open to improvement as a five-year-old though and hopefully, he can give a good performance.

Some news from the bloodstock branch too. Festival D’Ex was a first time out winner over hurdles for Gordon Elliot, having been sold by RHBloodstock as a foal. Epson Du Houx also made his debut over hurdles but fell at the last when destined for fourth. But the biggest winner was Walk In The Mill who claimed his second successive Becher Chase under another superb ride from James Best. A big win for Robert Walford and his team. He was in fact the 100th graded winner for RHBloodstock, so it was a great way to bring up that landmark.