Happy New Year everyone! If we can start this year in the same fashion we finished off last year, we could have a good time of things. We maintained our excellent form from the last newsletter with two more winners from four runners. Lord Du Mesnil brought up his hattrick in emphatic fashion at Haydock and put himself in the picture for some back races in the spring. At Newbury, Defi Sacre survived a tense wait for the stewards to claim his third win in a row as well, hanging on very gamely in a tight finish. For both horses, it was a case of make hay while they are in good form and it has paid off for our little yard. Both of them will probably get a break now to recover from their exertions and keep them fresh for the spring. Elsewhere, Who’s My Jockey made his stable debut after joining from Phillip Hobbs’ and ran very well before tiring late at Cheltenham on New Year’s Day. It was nice to get him to the track and we hope he can kick on from that performance.

It’s been some December for us with five winners from eight runners and an overall strike rate of around 28% for the season so far. Let’s hope we can keep that form going a bit longer!

We start with yet another big Saturday winner as Defi Sacre prevailed in an exciting finish over at Newbury. Having travelled nicely into the race under James Best, he took closer order turning into the home straight and pinged the last to land in front. He had two challengers trying to come up the inside but battled back gamely to shake them off and get his nose in front at the line. We had a tense wait for the stewards after the runner-up was short of room at the elbow, but they sided with us and Defi claim his third win in as many runs. We’ll give him a bit of a break now after five runs in two months.

On the same day, Eureu du Boulay was up at Leicester to run in their feature handicap chase over two mile four, but he was unable to follow up his Fontainebleu success over hurdles back over the bigger obstacles. We thought he was quite harshly treated with a seven lbs rise in his chase rating. With Paul O’Brien in the saddle, he tracked the leaders most of the way before top weight began to tell against some horses carrying a lot less. He eventually finished fifth of nine runners. 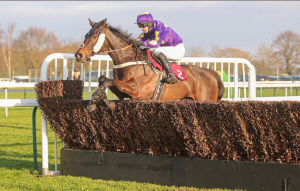 Lord Du Mesnil completed an amazing Haydock double for us when following up his Tommy Whittle success with victory in the Last Fling over three and a half miles. Paul O’Brien was on board again and the pair settled in the lead early and galloped the competition into submission in tough conditions. It hadn’t been the plan originally to go back to Haydock, but he was in such good form that we had to strike while the iron was hot. Punters and pundits were already touting him as a possibility for the Grand National in April, but such a tough race might be too soon in his career. He will get some entries in the big festivals in the spring, but he’s deserved a nice break first

Our last runner of the week and our first of the New Year was Who’s My Jockey who had a very nice first run for us to blow the cobwebs away in a competitive Cheltenham Handicap Hurdle. He was sat just in behind the early leaders and tracked them before jumping up well to challenge at two out. Ben Jones managed to get him to the lead on the inside as they turned into the home turn, but after over two hundred days off the track, his challenge petered out up the hill. The inside was where the worse ground was, so that will not have helped his challenge. All in all, though, we are satisfied with his return and we hope he can kick on from that.

Four horses are entered up this week, starting with Eureu du Boulay at Sedgefield on Friday the 10th over two mile three. He won there on Boxing Day in 2018 and Thomas Wilmott is set to take the ride again as he did then. A repeat performance would be great, but it’s a tough enough race.

Valadom has two entries, one at Wetherby on Saturday the 11th and one at Kelso on Sunday the 12th. Both races are around the three-mile mark over fences. As it stands, Wetherby is more likely of those two, but we will have to wait and see where he ends up.

Ramonex is due to make his reappearance after a lengthy lay-off, having last been seen in the summer of 2018 when he was runner-up over fences at Perth. He goes back over fences over two miles five at Kelso, all being well. He’s still only nine and hasn’t got a load of miles on the clock and hopefully he can make a nice return.

Finally, Echo Watt is another who’s been off the track for a while and has his return pencilled in for Lingfield next Monday, where he is set to make his debut over fences. A young horse still, he relished deep ground when winning his bumper at Ffos Las and we’re hopeful of similar conditions to see him run a decent race.